Ah, food in Korea! It has been two months since I have been back home and I still look at the food pictures and videos in Korea. They all taste pretty good, some better than average but in my opinion, I have not tasted anything extremely bad (well, I wasn’t that adventurous but it is definitely possible to find delicious food everywhere).

Part 1 will be on market/street food edition. These are places where you can find food at cheap prices and delicious too. However, store vendors often don’t know any English at all so it could be hard to communicate if you have no knowledge of Korean.

Note: Do research more on when the markets will be opened.

I had first knew of this market from: https://youtu.be/n1nBNmZIo5M 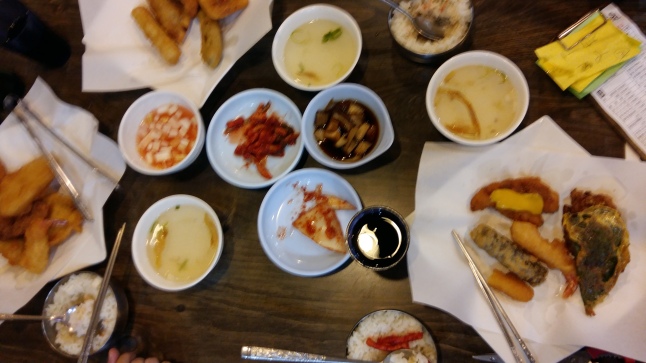 This market sells deep fried food at cheap prices like perhaps 500 won for a cheaper piece. They are deep fried and displayed out there for customers to choose. After choosing them, pass to the owner and she will pan fried (with lots of oil) to warm up the food. You may also order other food from their menu. For example, rice and cola. I went there on my first day first lunch with my parents. Such food were meant to match with alcoholic drinks. Thus, I am guessing that was why there were not that many people during lunch time. Besides us, there were only another group of customers, a group of young adults drinking and having fun.

This is not the healthiest food but it is delicious, cheap and an authentic eating experience. We had ordered too much that time, about 6 pieces each and couldn’t finish them no matter how we tried.

I had first knew of this market from: 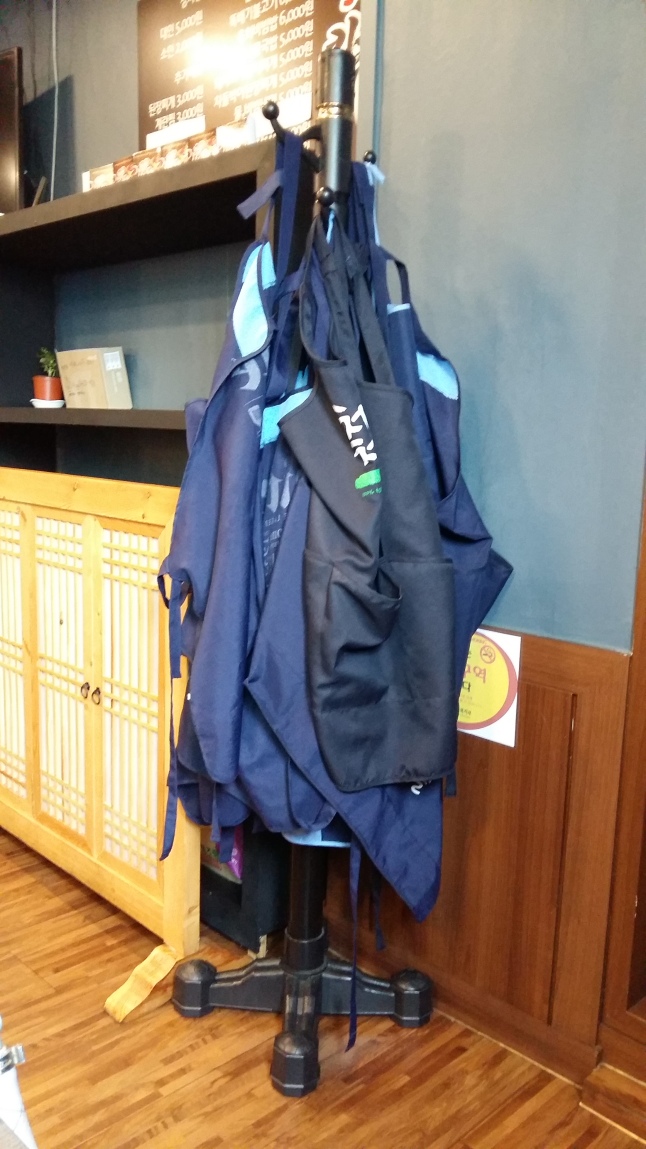 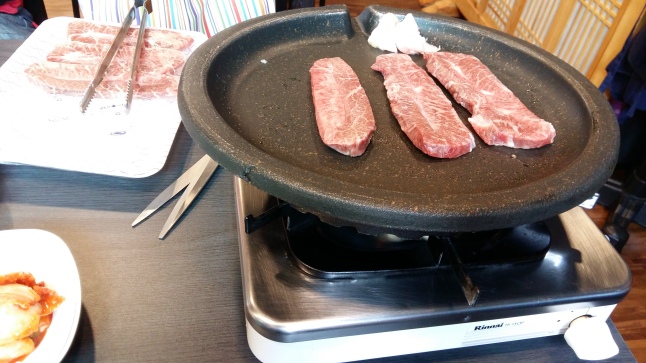 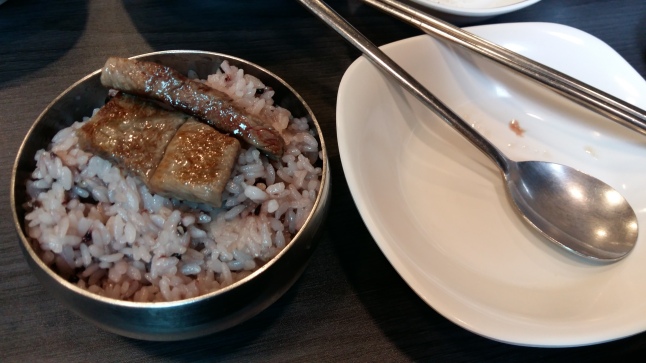 This is a place for affordable Korean beef, in my opinion. For 458g of A++ Korean beef charged at 43500 won, this is definitely enough for 3 hungry adults. Majang Market is the largest meat market in Korea. We bought our Korean beef from the first store. The owner was in the store next to his so he might be there if you cannot find him. Choose your meat and pay the owner. He was very kind and gave us a 500 won discount (total 43000 won payment). After that, just as written in the blog referenced above, he led us to the restaurant upstairs where we bbq our meat and ate happily. We also ordered 3 bowls of rice. Do note that there is a 5000 won charge per adult and 2000 won charge per child for entry fee (and for using their place to cook your meat). Very yummy indeed.

I personally don’t recommend this market. Very crowded and noisy. Space was also very crammed. Average food and prices. Perhaps it was because we reached in the evening, near 7pm but it was really a tiring experience to squeeze with everyone. A disclaimer though I did not try all the food available in the market. Maybe I should go back there at a better time to try more food. 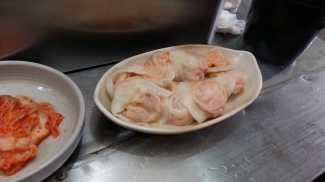 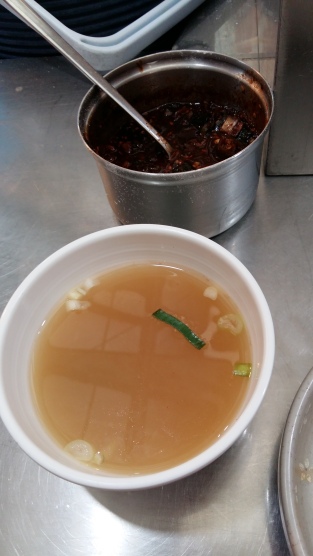 4. Tongin Market – a place for cheap food near the palace (some fun too)

A market about 15-20 minutes walk away from the Gyeongbokgung Palace selling cheap food in a fun way.

You will first buy your bento box from the man seated in front of the entrance to the second floor for 5,000 won and will be given 5,000 won worth of tongin market coins (10 coins in total). Then, you can proceed to choose any food you want using the coins from food stores that participate in this programme. If you run out of coins, it is alright to pay using cash. If I didn’t remember wrongly, you may also buy rice and soup for 1,000 won (2 coins) each on the second floor. When I was there with my parents, I didn’t manage to go up to the second floor sitting area as it was raining heavily and there was no shelter up the stairs. Cheap and nice tasting enough but not all food are made hot and could be displayed there for quite a while. 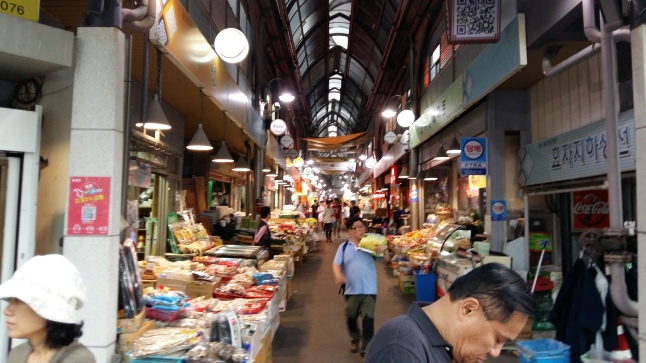 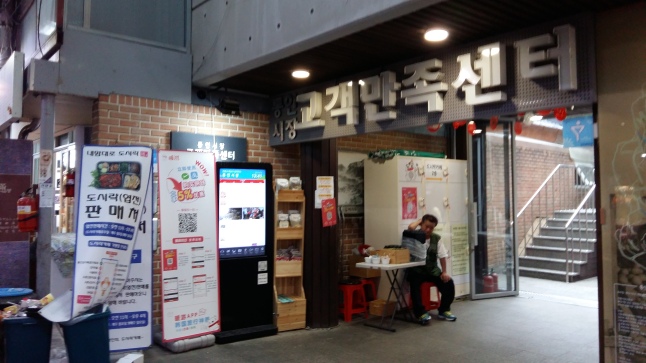 5. Mangwon Market – a place for cheap street food and even cheap coffee

Although the two videos above are in Korean but they show some of food in Mangwon market as well as the price of the food. 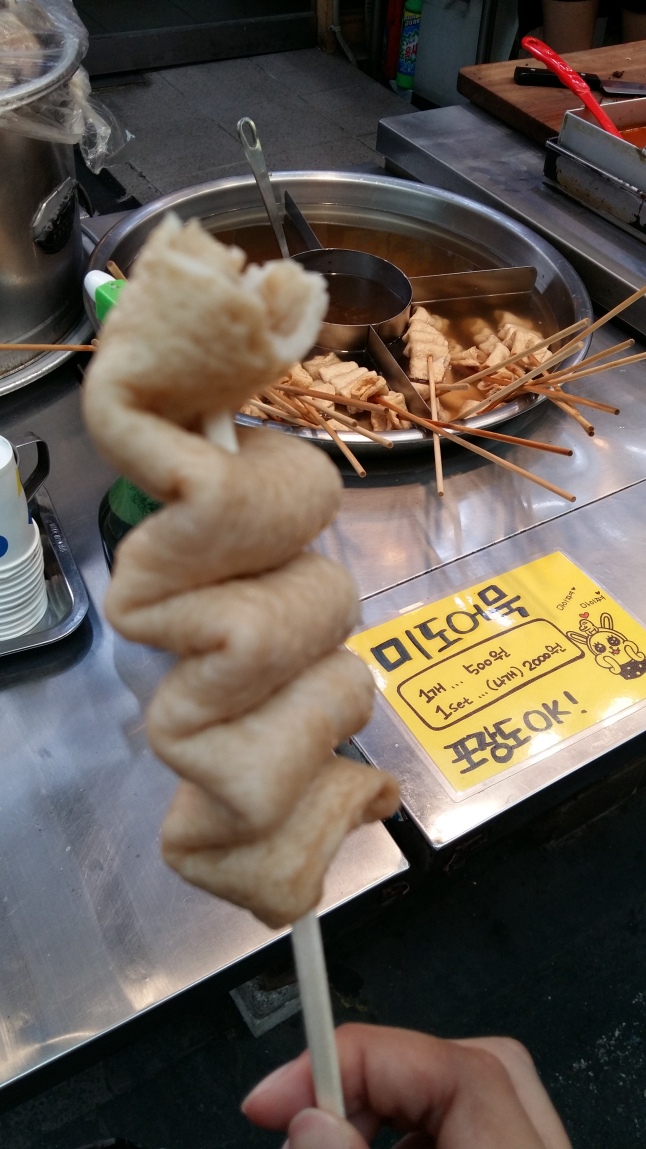 Mangwon market sells really delicious street food and is also famous for their chopped noodles (too many to try in just one trip and only one person). I also bought 3 cups of canned coffee from one of the mini mart shops there for 2,000 won in total (The same one can coffee would have cost about 1,000 won elsewhere.)

One of the most popular and common places to find street food. Not the cheapest place to eat street food but oh well, for the experience~~ 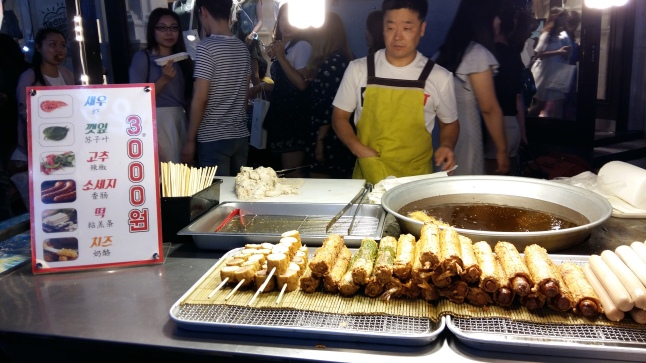 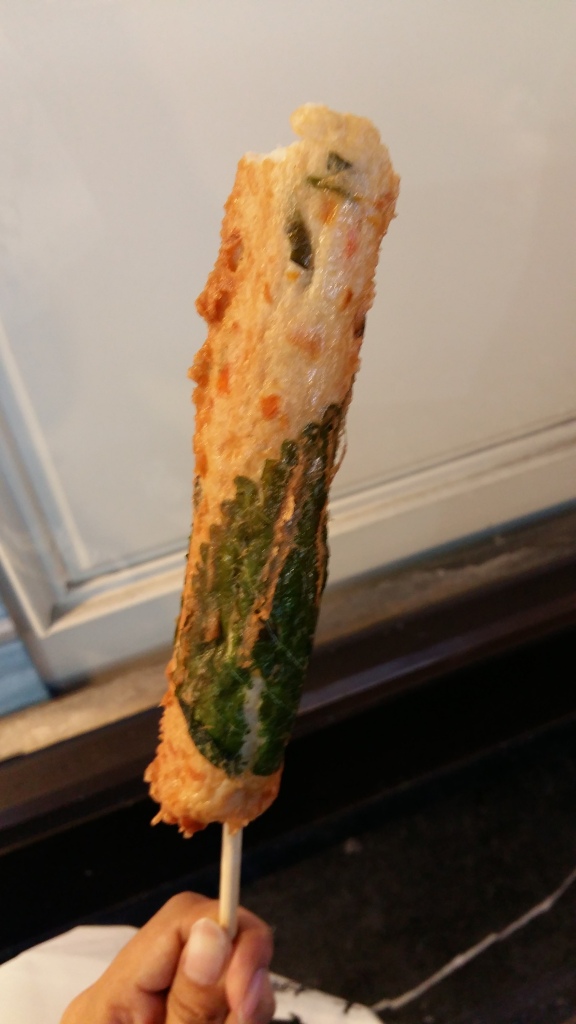 I wanted to try something special like a leaf-flavoured fish cake (3,000 won for one).

Next, I had tried the strawberry mochi (2,500 won for one). So delicious and sweet. It had contained one whole strawberry inside. Yum!

Finally, I had mini fried crabs (5,000 won per cup). There was a choice of either sweet and spicy or something else(non-spicy). I chose the spicy one and it was indeed really spicy but yet so delicious.

It was too bad that I went to Myeongdong alone and could only tried 3 different types of food. They tasted delicious but was more expensive as compared to street food sold elseswhere. However, in my opinion, I did not see the mochi or crabs sold elsewhere so perhaps it was worth the price. 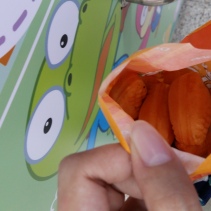 The smallest portion of 9 small delicious goodies was at 3,000 won. It was extra yummy as it was hot and had rich, creamy like fillings (something like kaya or cream if I didn’t remember wrongly).

7. Busan Fishcakes – a place to go crazy for fishcakes

This is not a street food or food sold in the market but I consider it a delicious snack food that we can buy and eat anywhere easily.

I have seen this particular brand of fishcakes at Busan KTX Station and at Centum Shopping Mall, Food Street level.

I have seen this shop’s factory being introduced in: https://www.youtube.com/watch?v=LW4PeJd-fUM 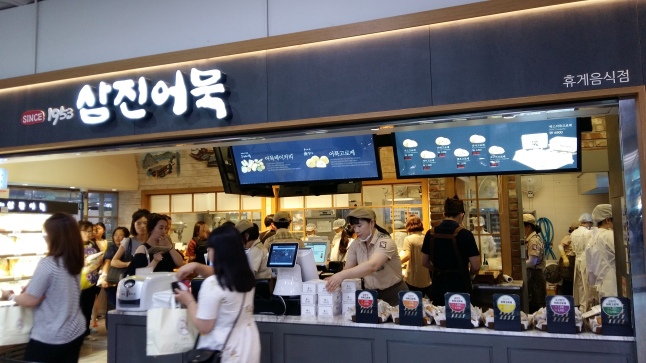 At Busan KTX Station – discount if you buy 6 fish cake balls (separate queue – 1,200 won for one and 6,900 won for 6) and they will put in a box for you. Otherwise, they will put them in a nice plastic bag as seen above. 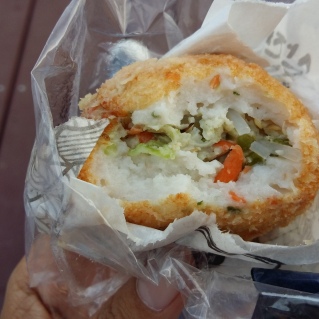 How the fish cake balls look like inside. I love the potato flavour so much but find that the pepper flavour was too overwhelming for me. 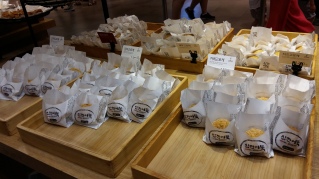 At Centum City – there is no discount here as compared to the outlet at Busan KTX Station. Also pictured together are some of the varieties of fish cake the shop has to offer. Other fishcakes are mostly sold at 500-800 won each.

There are so many flavours of fish cake at this shop and it makes me so excited while choosing them. I really had to restrain myself from overbuying them and never had imagined the day where fish cakes became so tempting till this extent. I had liked them so much that I went to two of their outlets during my 3 days in Busan. Flavours for fish cake balls include potato, cheese, sweet potato, pepper, curry and prawn. Other special fish cake flavours include sotong, japchae and rice cake(tteok) etc. 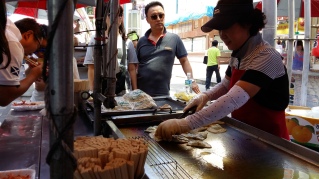 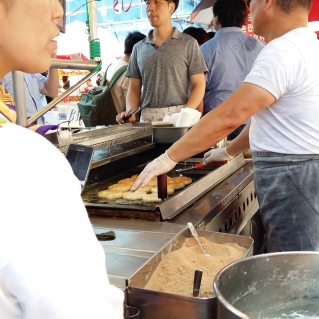 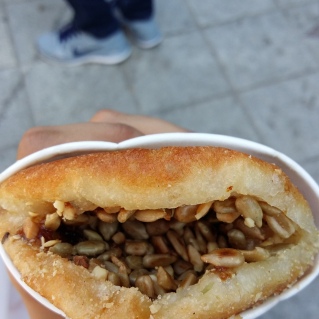 The most famous food in Busan: Hotteok (1,200 won for one). It was pan fried with lots of oil but didn’t taste excessively oily and filed with lots of sunflower seeds for extra crunch.

I had went to three different amusement parks during my two month stay in Korea; Everland, Lotte World and Daejeon’s O-World. I have to admit that I didn’t eat much when I was at Lotte World and O-World but that was where I started to enjoy more of the amusement park’s street food (hehe but still not a lot though).

Butter squid (3,500 won per packet) at Lotte World. Not exactly very delicious but I wouldn’t mind trying again. I ate this to compensate my lack of time to eat movie snacks. 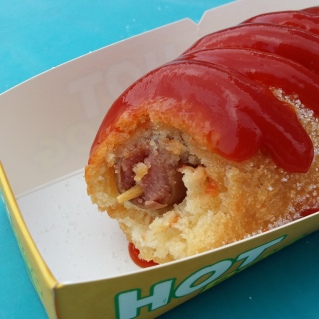 Hot dog (2,500 won per stick) at O-World. This was my second time eating this sort of hot dog in Korea and I really like this snack too!

Note: there are quite a few other amusement park food which I didn’t try.